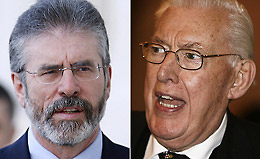 On this day, March 26th, in 2007, a historic meeting was made in the North of Ireland.  Ian Paisley, an avid Protestant firebrand known for his “Never” phrases sat down with the other side of his coin, Gerry Adams, who led (and leads) Sinn Féin. The two men hammered out an agreement at Stormont that promised to form a power-sharing partnership by May 8th of that year. For the first time, the ideological opposites were able to come together and reach an agreement that was mostly fair for most of their constituents . Both Former Taoiseach Bertie Ahern and Former British prime minister Tony Blair hail this  first meeting and agreement as “a reconciliatory and transforming moment in British-Irish history.”

Of course, a mere eight years later, that agreement is starting to wear at the edges and the factions are fighting again, storming out of meetings and saying that “never” word again. Perhaps that is because Ian Paisley – who had been the figurehead of Loyalist Protestantism in the North for many decades – is no longer living. Without someone that powerful exerting his influence over his side of the divide, the agreement to work together is not the priority that it had been for the men who originally made it. Gerry Adams is still around, but he tends to have his hands full these days with allegations about his past and the past decisions made by the secret Republican courts.

The power sharing agreement certainly was a surprising and conciliatory moment in history – but it will only be a truly transforming one if it can be held together by those left in the political arena. Given the fact that another walkout by the  DUP and the UUP  happened again today  over the Ardoyne parade decision, the future of that agreement is tenuous at best….and it doesn’t look good.

Regardless of how it ends up though, the meeting of the Never men who said Yes today in 2007  is definitely one for the history books and should be honored today. Now if someone could figure out how to keep it all together, that would be even better.

Currently living in a post-Derry Girls pile of tissue. I’m so glad I not only saw them as they were aired but that I have enough friends from that corner of the world to know how accurate so much of it was. It’s a brilliant and beautiful show you should probably watch (over and over again). #derrygirls #doire #daire #lisamcgeeisamazing #iwantmore #derrygirlsstateofmind #northofireland #thetownilovesowell #cracker #sistermichaelmood #thatsawrap
On this day in Irish history, Easter Rising signatory, Irish writer and poet, and newlywed Joseph Mary Plunkett was executed at Kilmainham Gaol for his role in the Easter Rising. Fellow leaders Edward Daly, Michael O’Hanrahan and William Pearse were executed along with him. Plunkett’s glasses remain at Kilmainham to this day. #kilmainhamgaol #easterrising #easterrising1916 #grace #irelandspatriotdead #josephmaryplunkett #onthisday #doomedlovers #irishhistory #easterrisingexecutions #commemoration #irishhistorynerd #readmorepoetry
Follow Choosing the Green on WordPress.com