Yesterday’s plan was to observe and walk behind the 1916 Societies’ Easter Commemoration parade, being a proper journalist and chronicling the march. Instead, upon arrival at the GPO, my traveling companion and I were handed the Cumann na mBan flag to hold while the two ladies it belonged to got to know us and socialized with other parade organizers. When the flag was taken up to join the others of the parade, the women invited us to join them in carrying the Constance Markievicz banner, and we were given pride of place near the very front of the march. It was an amazing experience and beyond my wildest imagination of what yesterday could be.

END_OF_DOCUMENT_TOKEN_TO_BE_REPLACED

Tomas MacCurtain’s pipes were played yesterday in Cork for the 1st time in about 100 years. I was lucky enough to witness the fellow American play them at Cork’s National monument as they honored MacCurtain’s life and love of music. On this, his birthday and the anniversary of his death, you can too.

This city is like nowhere else I’ve ever been. It’s powerful, amazing, and heartbreaking. As a student of Irish history, to stand on Free Derry Corner during a brief break from the rain was potent and awesome. 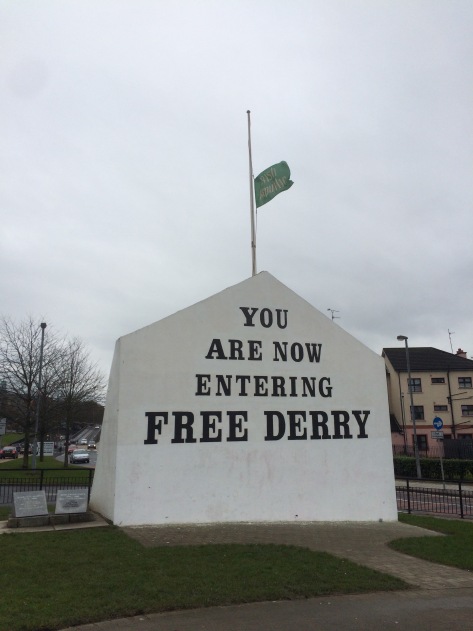 Yesterday I took a long ride with Paul Doherty whose father was murdered on Bloody Sunday. It was an intense afternoon full of laughter and a few silent tears. I have never written about that massacre specifically and I’m still not sure I ever will. His voice and the voices of the other families and survivors are loud enough and more important. But it has been mentioned here because you can’t have an Irish blog with no mention of Bloody Sunday; just like you can’t walk or drive through Derry without seeing those scars and the strength and anger that still remain so many years later. I can’t recommend Paul’s taxi ride highly enough. We went everywhere and he took me to many of the murals off the beaten path. When he found out I write an Irish blog that’s somewhat focused on women, he took me to a couple that honor women specifically. 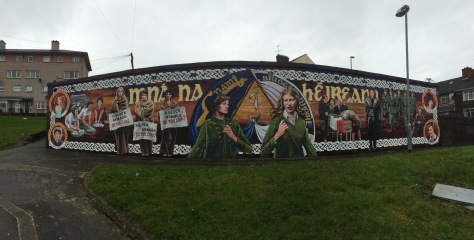 My only complaint thus far is how shoddy the wi-fi is my hotel. Other than that, I may be in love with this region. I have a giant oak tattooed on my body, so I guess it’s no surprise that I’d love Derry considering that its name means Oak Grove. I have a day or so left, so if there’s something I absolutely must do or see here, let me know.

Today Bobby Sands would have turned 62 had he lived beyond his hunger strike. Since he did not and I happen to be in Belfast, I decided to visit him (and others) in Milltown Cemetery, bringing flowers that were long overdue.