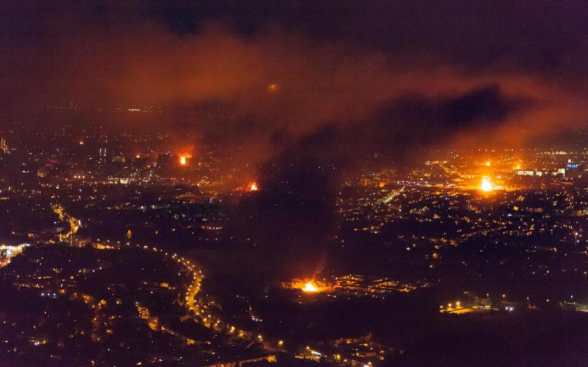 Well, I almost made it. I almost made it through the season without posting another one of the pieces I write every single year about the sectarianism and the hatred that fuels the flames of bonfires throughout the north of Ireland annually. I guess I was hoping that it was all going to be fine this year, despite knowing it wouldn’t be. I suppose I thought if I didn’t talk about it, then it wouldn’t make me so angry. It doesn’t work like that though. In fact it might be more infuriating to watch it go all down without commenting  – especially when it looks like this marching season buildup has been increasingly worse than those in recent memory.

In Derry, the town I love so well, sectarian-tinged violence has been the norm for at least a few weeks now and in Belfast the Ulster Volunteer Force (UVF) has openly issued threats, giving up any pretense of being dormant or underground. In County Down a bus was commandeered and set on fire and there is evidence of sectarian crime throughout the entire region in the lead up to the twelfth. This is not a shared environment, it is a carnival of extremism and intimidation. It is not a culture, it is a bully force that has grown so desperate that it would rather see the world go down in flames than bend one inch. It is a dying spectacle that many would like to leave in the past where it belongs.

This would be easier to do if there was a working government to deal with some of these issues but there’s still no one in charge, and no one showing the leadership it would take to truly curtail the ongoing annual violence that happens this time of year. There are no answers to what a changing landscape will look like and no courage or motivation to create one. There’s no help for those who need it. It’s a shameful situation that needs to be addressed and most residents in the area are literally BEGGING for a change. There’s a piece I read just today that is as potent as it is heartbreaking. It’s controversial and uncomfortable and furious. I disagree with some of it but it haunted me for hours and I reread it many times. In the end I felt like it really needed to be shared, especially during this marching season. Sure, it’s about Derry, but it could be nearly anywhere in the region with few changes to the wording. I hope it strikes you and gives you some food for thought like it did me, whether you agree with it all or not. As far as I can tell, it was written anonymously by someone over at the ‘Derry Wans’ Facebook page and it reads:

We all love a bitta craic in this town and sure the last few days on FB have been pure drama but we need to get serious, if just for a moment. I know, I know, another preachy FB post telling ye off for having the craic. But that’s not what this is.

This is just….a reality check.

Let’s take five minutes and look at the reality of Derry in July 2018. Clipper Festival, all smiles and cheers on the quay right? Look past the colourful banners and £20 for a tiny piece of fudge stalls and you’ll see the reality.

You’ll see a heartbroken family searching for signs of their child.

You’ll see tired relatives and broken friends looking at the river not in excitement and wonder, but in pain and mourning.

You’ll see buildings in disrepair hidden by coloured banners, and fake shop fronts put up to make the city not look like the broken shell it is becoming.

A shell that is barely holding back the depression, addiction, anger and pain on each and every street.

One hasn’t been seen since.

And this has happened nearly every week since the year started and there is no end in sight, this will happen again, and again and there’s no government to do anything about it.
Just a few volunteers who are under funded and over worked out there saving as many lives as they can. But they can’t save them all and more will be lost.

We are a city people come to to die in. That’s the reality of Derry in 2018. And that’s just the riverfront.

A week long nightly riot in the bogside and around the walls. People will say “They’re just bored angry wanes”  They’ll say “Why don’t the police just lift them all”  They’ll say “It’s the council’s fault for not giving us anything to do”

They’re not bored and angry, they’re uneducated wee shites who would rather destroy something than contribute because that’s how they were raised. That’s what they grew up with and seen every summer since they learned what a Landover was and why it was “the enemy”. Their parents don’t care, not really, not when they grew up doing the exact same thing. And the “adults” pushing these kids into throwing petrol bombs at the cops so they can take a few cheeky gun shots from the shadows. Ffs what a bunch of pansy’s. These are the pricks we need to find and lock up. These are the cowardly no brained, no honor having cunts who are to blame for this shit. They think they’re gangsters yet they’re sending children out to attack police while they shoot from the shadows. Aye big men. Big men who are happy enough to take British benefits and British paid prescriptions. But they don’t wanna hear that. Cowards, each and every one of ye.

You’ll have over paid under worked MLAs scrambling for photo ops and gurning at you with lie after lie about how they’re here for the community. They’re here for the wages and recognition, nothing else. They’re here so you remember what their face looks like when it leers at you for a vote from every lampost in town come election season.

Another crowd in sore need of a reality check.

Look this is it, this is Derry today.

A Shell of a city that is ready to crack and there’s nobody but you and me left to clean it up. That is if the growing levels of depression, poverty, suicide and addiction dont get us first.

When you’re up the town this week take a good hard look and see the reality of Derry in July 2018.

Something HAS to be done.

Before it’s too late.

Alot of people asking “But what can we do?”

Put simply we can be neighbours, we can look out for each other and our community and if enough of us say No to the wee shits they will stop.

As for addiction and a Suicide that’s a tougher issue. But again can be helped by being neighbours regardless of religion or class we need to be there for each other. Strangers or not. Everyone needs help some time, be that help for someone. Even if it’s just a listening ear.

And finally what we NEED to do is STOP voting these money grabbing liars into office. Stop falling for the green Vs orange argument. Stop pandering to their political jargon and cross talk. Stop believing the lies that ALL major N.I parties tell every day when they say they work for us.

Tell them no more, they’ve been paid 9 million pounds since the assembly collapsed while our cities and people die.

It’s not fucking on anymore. SF, DUP, SDLP, PBP I don’t care what you call yourselves or who you lie and say you work for. You’ve all been well paid while we die in the rivers and streets and still NOTHING is done.

No more voting for parties in a system that is broken.

No more supporting the political groups that use us and our beliefs as a soap box to get paid.

No more letting them away with it.

It would be laughable if it wasn’t so fucking depressing.

N.I Politicians are Liars and thief’s.

(end. The link to the original post is here if you want it)

Stay safe out there a chairde.

One thought on “The twelfth”