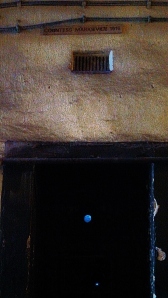 “I do wish you lot had the decency to shoot me.” -Constance Markievicz, 1916.

Constance Markievicz may have wanted to die like her compatriots for her role in the Easter Rising but the English wouldn’t execute a woman. In the end, they may have wished they had, for the Countess had another 11 years to continue being a thorn in their side. She went straight into an even more political role, creating a world where women were more equal to the men, remaining staunchly Republican and inspiring thousands of people, including myself, throughout the years since. She is one of my favorite heroes.

The statue in Stephen’s Green

On July 15th, 1927, the world lost a warrior and an amazing person. The fact that she was a woman in a time when women were mostly dismissed and barely tolerated only made her that much more fierce and that much harder to ignore. She was respected by the men she fought with, and the people she guided and led for most of her life. The rebel Countess, Constance Markievicz, fought hard for her place in history, and remains one of the most revered and recognized women in Irish history.

“Dress suitably in short skirts and strong boots, leave your jewels in the bank and buy a revolver.”

Militant in nature and a brilliant organizer and strategist, Constance Markievicz fought valiantly for an independent Ireland. She was a suffragette, a politician, a member of Cumann Na mBan and together with others was responsible for creating the first Dáil Éireann. She also founded Fianna Fail, an Irish program for young boys and later, a political party. Her deeds in life affected every woman in Ireland, politically and emotionally, and there are so many that a post like this could never do her justice. I’d need to write a least a book or two – and don’t think I haven’t thought about it either. Her story could fill many a tome.

The Countess’ body, being protected by her precious Fianna Fail

Her life was amazing and her funeral was nothing less. She was refused a state funeral by the Irish Free State government but it was attended by hundreds of thousands nonetheless – both common and royal. It was a suitable crowd, and though he refused to fight by her (or any woman’s) side in 1916, Eamon De Valera gave the graveside oration. She is buried in the Republican plot at Glasnevin Cemetery in Dublin.

Rest in Peace, Countess. I would never celebrate your death, but I will honor it. 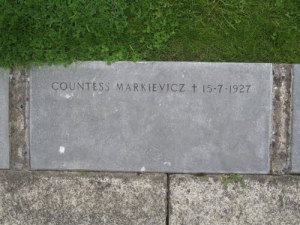 3 thoughts on “The Death of the Countess”