On the last day of our recent journey in Ireland, it was pouring down rain and we were headed back toward Shannon from Belfast. We were on the main highway and getting cranky because of the storm and from the bigger roads, there’s not a lot of super beautiful scenery or many interesting things to see . It was not the way we wanted to leave, so once we were in the west, we picked an exit at random and started exploring it. There were a few ruins here and there. There were a few historical signs pointing off in random directions and we found ourselves in the middle of nowhere on a country road hunting for castles. A tractor was coming at us from the other direction and as we pulled over to let him pass, we asked him if there were castles nearby. He told us about 3 or 4 of them and ended with “but you know it’s raining, right?”  He shook his head when we said we didn’t care, muttering something about crazy girls. Then he began to give us directions to the one that wasn’t a hotel saying,  “Well then, just go up the road a few miles, look for the dog at the top of the hill, pull into the driveway of the stone house, knock on the door, and ask for the key to the castle.” We thanked him and continued on down the lane. We found the dog, shivering and wet. We pulled into the drive, and knocked on the door of the stone house. When a very startled man answered and we asked for the key to the castle, he too responded with “You know it’s raining, right?” while he frantically looked for it. After a phone call or two and a reasonably thorough search, this is what he gave us – there’s no mistaking that it is the key to a castle, with that kind of key chain.

He then made it perfectly clear again that since it was raining, he was not coming with us. When we asked where to go, he looked at us a bit exasperatedly and told us we couldn’t drive there. He said we had to walk up the gravel path, and over a lot of fields (closing every one of the cattle gates behind us) until we came to another mostly finished gravel path that would eventually lead us to the castle. Suddenly we questioned our intentions, after all, it was raining. But we finally decided to brave the swampy fields, wandering herds, and muddy paths because we might never make it there again. After about a half hour hike, this came into view and before we even reached it, we knew we’d made the right decision.

Using the magic key, we entered and found that the intact walls could be walked on, which was a first for all the castles we had visited. Not only that, but once we were in the keep, we realized that the stairs in the tower were intact too and we began to climb the terrifyingly slippery and uneven steps.

All the driving, hiking in the rain, and stair climbing had eaten up a lot of our day, but as we stepped out into the open air on the top floor, we realized it was worth every single second. We were over six stories high and the walls which had looked tall from below were miniscule from the roof of the tower. It had magically stopped raining as well and these were just a few stunning shots of our view.

Our little adventure had led us to what was once considered the largest castle in the area, not because of the size of the structure, but because at one time its outer walls (a second set that are no longer standing) had encompassed nearly 12 acres of land. The keep was in remarkable condition, given that it is about 450 years old and the view from the roof was amazing.  We lost our light far too soon and the rain soon began again. Since we had to get to the airport we did not move in and spend the night (or the next few years) like we so desperately wanted to but it was very tempting. The inside was just as magnificent (and treacherous) to explore as the rest. The former rulers were even kind enough to leave us a medieval restroom, because, you know, it’s a long hike. 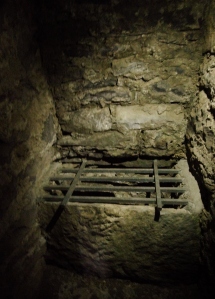 We made it back over the river and through the woods to the stone house just as full night fell and made our final drive to Shannon. It was the best last day in Ireland that I could ever imagine, unless of course, that last day had never come at all.

If you choose to go castle hunting for Fiddaun, you should know that it is on private land and is maintained by the Department of Public Works. The landowners will decide whether to accompany you or not on your trek. Apparently it is a more popular destination in the summer, so you may not get it to yourself if you go in the height of the touring season. It is well worth the trip though – and a glimpse into castle living like no other that we found. Though it may be difficult to get to, it is breathtaking. Just be careful because when you’re on the spiral steps of slippery doom it is all too easy to imagine why so many people used to die falling down their stairs.

(Fiddaun Castle is in County Galway, located somewhere off the N-18 in the countryside a few miles outside of the village of Gort.) Enjoy!