In case you can’t tell by now, I’m a little obsessed with Ireland and its history. This includes a lot of reading and writing about the Troubles and the horrific abuses that people suffered throughout that time period. I never had to live through anything like it, but it was easy to connect the dots between the Civil Rights movement in the US and the North of Ireland. I spent a lot of time being grateful that I missed most of the heavy lifting and hard decisions that were made to eventually grant basic human rights and equality for everyone (in theory). Last night that gratitude and privilege vanished as I watched people in my own country being hit with the same brutal tactics and illegal weaponry that defined the Troubles and the Civil Rights movements of the past. They were unarmed and peaceful, and many were nearly killed because they have the gall to believe in people over profit and water over oil.

The Standing Rock Sioux tribe in North Dakota has been fighting to keep an oil pipeline from being built near their lands for the better part of a year now. Energy Transfer Partners, the company building the Dakota pipeline, already had to reroute it once when the (largely white) civilian population rebelled against the project going through their own neighborhoods. Instead, the pipeline will now travel the states through largely rural areas that border reservations and encroach on sacred Native American sites. It will also travel under rivers and lakes that are the water supply for much of the population – not just those that live on the reservations. Energy Transfer Partners sidestepped many proper channels when they rerouted the pipeline and several environmental impact studies were not performed. A lot of people were not told of these shortcuts and were not fully consulted about the construction of the pipeline, including the Standing Rock Sioux. The largest number of Native American tribes in recent history have united to stop this potentially dangerous pipeline and have set up camps along its route to protect the rivers and lakes, their land, and their sacred sites. These camps are peaceful and the water protectors and pipeline protestors are unarmed. This has not stopped the government and the police from attacking them mercilessly on a number of occasions. Last month private mercenaries, police from five different states and the National Guard shot and killed horses out from under tribe members. They attacked the camps with batons, rubber bullets, and gas. They unleashed dogs on the protestors and fired ‘non-lethal’ munitions. The situation escalated quickly, without any coverage from mainstream media despite many calls for help. The sheriff’s department filed arrest warrants for the few independent journalists who were reporting on scene. A call went up for supplies and funding for the protectors and their cause but still, nothing stopped the work on the pipeline and the confrontations grew.

On the night of Nov. 20th, 2016 they came to a head in brutal and likely illegal fashion. According to mainstream media, there was a “clash” that began with protectors starting fires. This meant that the police “were forced” to deploy their water cannons. This is a blatant lie. Fires were started but they were lit by flashbangs and compression grenades that were fired at protestors standing on a bridge. This bridge was enclosed on both sides, leaving the water protectors trapped and kettled unless they retreated or trampled each other to get out. The compression grenades failed to move them so in a cruelly ironic twist, the people protecting their water supply were attacked with water. The mercenaries, soldiers and police fired their water cannons every five minutes or so for many hours – which might not be that big of a deal normally, except that the protestors were already dealing with freezing temperatures even before they were hosed down repeatedly. This was a brutal assault that resulted in numerous cases of hypothermia and cold-related injuries. One could argue that it was a calculated assault with premeditated intent to harm or kill, however dramatic that sounds. When medics arrived with blankets and supplies, the cannons were turned on them too, which is a serious breach of any rules of engagement. 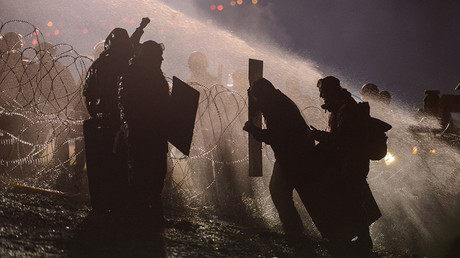 The medics and the freezing wet protestors were also hit over and over and over with tear gas. There was so much gas in the air that people lost control of their bowels, vomited profusely, some stopped breathing altogether and others passed out cold. The gas remained in the air for over six hours. Then the forces unleashed more rubber bullets, compression grenades, flash bangs and the noise-producing, disorienting LRAD on the mostly incapacitated, hypothermic, injured protectors. It was horrific to watch, horrible to hear the screams and gasps, and yet, thousands of people watched it unfold on live streams and Facebook videos.

Thank goodness we did because today there was hardly any honest reporting of any of these serious human rights violations in the mainstream media. There were few mentions of the incident at all and no one broadcast any of the videos that unfolded live last night, despite livestream operators giving permission for their videos to be used. Nothing is more infuriating or potentially frightening than a silent press. It makes you wonder who controls them after all and why a temper tantrum about a Broadway show is more important than police and private security actively trying to hurt, maim, kill, blind, and silence hundreds and thousands of people who just want clean water and the sacred land that was promised to them. This story has been buried for nearly a year and the few mainstream news sites that picked it up did so only after such brutal force was unleashed. They still say things like people “claim” this happened or they use words like “clash” which imply that the fight was mutual. It was not and hasn’t been. Each time there’s escalation it is on behalf of the oil company, not those who are trying to block them.

The Army Corps of Engineers has asked the oil company (ETP) to halt construction while it reviews the plans (which they haven’t done). The UN has advised the United States to stop the pipeline construction because it violates the UN Declaration on the Rights of Indigenous Peoples. The experts go on to admonish the government for not protecting the human and civil rights of the protestors. There was little to no mainstream coverage of their opinion and last week Obama said he’d “see how it plays out.” There was no further comment from the White House after last night’s brutal attack, despite many calls to do or say something about it. After all, ultimately the President is supposed to protect us all from threats foreign and domestic. Obama going to run out of time to do that job soon enough – ignoring it now is unacceptable.

After Obama leaves the White House it instantly gets a lot more horrifying. Sunoco Logistics Partners (who has had more than 200 oil leaks or spills in 6 years) just merged with Energy Transfer Partners to the tune of about 2o billion dollars. It’s been hailed as the first “Trump deal” – and is a dark foreshadowing of things to come. Donald Trump is a stockholder in ETP and the CEO of Sunoco donated hundreds of thousands of dollars to Trump’s campaign. When that orange man of hate actually takes office, the Standing Rock Sioux and the other tribes will be trampled under the feet of Big Oil and Government Cronyism, neither of which has ever cared about them, their land, or their water.

The only hope the tribes have is that the Army Corps of Engineers will deny the permits to build under the lakes and rivers, and will delay the construction until either the impact studies can be completed or a compromise and another rerouting can take place. Given the antics of last night and the last couple of months, I’d say compromise is unlikely. Rerouting is expensive and our new leader is not only a shareholder in the oil company but a firm believer in rolling back all environmental regulations and getting rid of the EPA altogether. I don’t see a lot of hope in this situation, as much as I want to unless we can generate enough pressure and enough outcry to stop it.

To that end, if you’re wondering what you can do no matter where you live, here are some resources and ideas. The tribes ask that you don’t run off to North Dakota to join them. They have precious few supplies and provisions as it is. So send them what they need in lieu of joining them. They’ve got wish lists of specific items they need and it is important that anything you send helps, rather than hinders. Winter is coming so pay attention to what they need to survive it. You can also donate money directly to the Standing Rock Sioux and they’ll use your donations for emergency provisions, medical supplies, or legal funds.  Donate here. You can call or email your government leaders no matter where you live and encourage them to speak out against the abuse and the pipeline. It can be anyone from local activists to the highest office – every little bit helps. You can close your bank accounts and move them to another institution that isn’t connected to Energy Transfer Partners – and you can tell them why you’re taking your money away. You can call or email the Army Corps of Engineers and ask them to stop construction of the pipeline. You can call the National Guard (1-800-GO-GUARD) and ask them why they are being used against their own people on behalf of an oil company and demand that they halt the militaristic assaults on peaceful protestors. You can call or email your local television stations and demand fair reporting and media representation. You can share the videos, the tweets, the articles and any true social media reports you can find. You can sign this petition. Even the smallest things matter.

Water protests are happening all over the world. Water warriors are a global force and we need to support each other no matter where we live. Clean water should be a goal everywhere and no one should be assaulted for standing up for it. Please help spread the word, donate if you can, and prepare better for your own protests. It seems that the entire world has taken a great many giant steps back and that trampling on human rights and cracking down on dissent is par for the course again and increasing everywhere. Stay safe, strong and smart, friends and allies – and Stand with Standing Rock.