The memorial is in close proximity to the World Trade Center and it was still being planned in 2001 when the area was destroyed in a terrorist attack. Surprisingly, the work on the Hunger Memorial was completed less than a year after the towers fell and it was opened to the public during the summer of 2002. It already had some drainage issues and some other problematic quirks, but it opened anyway to the delight of any who wanted a taste of the Emerald Isle.

The memorial is truly made of Ireland. The structure itself resembles a neolithic tomb on one side and a stone cottage on the other. The partially rebuilt cottage comes from County Mayo and the rest is ancient limestone that was imported directly from Kilkenny. The surrounding landscape includes stones, plants, and grasses from every county in Ireland and at its center is a fallow potato field. On a good day it looks like this.

It is hushed and wonderful, despite its location. The sounds and the bustle of the city disappear into a profound silence, worthy of the memorial’s message. It is one of my favorite places in New York and it truly feels like a bit of Ireland, albeit a sobering and tragic one.

However, the memorial has been closed for quite some time now. The drainage issues have worsened over time and resulted in disaster for the site. The consistent leaks led to unsafe wiring and dangerous grounds and the landscape fell into disrepair, much like the abandoned villages of Achill and other parts of Ireland. The memorial was shut down and there was a question of whether or not it would ever reopen. The city balked at the $5.3 million dollar price tag to waterproof and repair the site, since those repairs are going to cost even more than the original build. Some wanted to abandon the project or move it to another location. Others wanted to replace it with something lucrative like high-end housing or more shopping centers. Meetings were often heated when it came to the Hunger Memorial’s future, but eventually the money was allocated to restore the project.

Obviously, waterproofing the entire thing is not possible given that it is an outdoor structure on the edge of a river but they do need to stop the cracks and the leaks from affecting the structural integrity of the building. These repairs are complicated because every stone and every plant is being catalogued before it is removed so that it can be returned to the exact same place that it originally stood. This extra work is laborious and costly, and it also takes a lot of time.

Last week I was in New York and I decided to check on the progress. I couldn’t get anywhere close to the site because of the ongoing repairs. The renovations are far from complete and the reopening that was originally slated for late spring seems unlikely, given its current state. 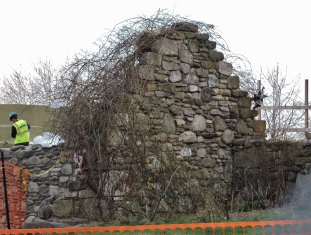 It does appear that they are studiously marking every stone so they know where it must be placed when they begin rebuilding. I got a chuckle out of this stubborn determination because it is such an Irish trait, that same one that helped many stay alive during the Great Hunger. It lends even more authenticity to the memorial that honors their tragic struggle.

Many travel books and websites list the attraction as permanently closed, but they are thankfully wrong. The work will take a ton of time and money but the memorial will survive, just like the many who landed near it. It is a worthy homage to Ireland, its people, and its past and I look forward to the day when anyone can explore its history again.

One thought on “The Irish Hunger Memorial”