Ireland has many tragic love stories in its history and one of them is the tale of Kitty Kiernan and  Michael Collins. Kitty was desperately in love with Collins and more than eager to marry him. They planned a double wedding with Kitty’s sister and her groom, but fate intervened and Collins was assassinated before the wedding could take place. A few months later on what would have been her wedding day, Kitty arrived at her sister’s celebration wearing black from head to toe. Collins’s death would affect Miss Kiernan for the rest of her life.

Kitty Kiernan was no stranger to tragedy. She has been described as an ‘ordinary’ woman but she had a zest for life, a large and loving family, naturally good looks, and an extraordinary determination that many haven’t given her credit for. She led a privileged life in Granard where her family owned a large percentage of the town’s businesses and were well liked and respected. However, when Kit was about fifteen one of her sisters died. The following year both of her parents passed away and a year after that, another sister died. It takes an incredible amount of strength to be able to suffer those kinds of losses and still remain vivacious, charming, and kind – and by many accounts, Miss Kiernan was all those things. She must have had a backbone of steel by the time Collins came into her life.

Michael Collins didn’t enter the picture alone. His best friend Harry Boland came with him and both men pursued Kitty. She liked the attention and was in regular contact with both men for a time, but when she finally chose Collins, she went all in. He was a strange choice for a woman who couldn’t be bothered with politics or intrigue, and in the end Boland might have been the better choice. His letters to Kit were full of passion and sentiment, while many of the letters from Collins were not. Miss Kiernan had nothing to say about the current state of Ireland and the various conflicts that her betrothed was trying to smooth out. At times, Collins seemed exasperated with this, but he stayed with her. Their extensive correspondence doesn’t show much interest from her in anything but wedding plans and what their life would be like together after the ceremony was done. Kiernan kept her goals and expectations simple – she wanted her man and a life with him and didn’t much care about what he was doing with his, as long as it included her.

Her dream was shattered on Aug. 22nd, 1922 when Michael Collins was assassinated in County Cork. Kitty was devastated and it was no help that much of the country of Ireland mourned with her. She had suffered enough already in her life and her fiance’s death nearly put her over the edge. She spent about a year traveling from relative to relative, adrift in her own life. She carried mementos of Collins with her everywhere she went, constantly re-read his letters, and consistently wore black. She could not get over her loss. Friends and family members remarked on how her demeanor suffered in the years after his death.

A few years later, Kit Kiernan finally did get married but the ghost of Collins never left her, and she remained more than slightly obsessed with her dead fiance. She and her husband had two sons and their youngest was named Michael Collins Cronin, after her first love. When she died on this day in 1945, she was buried in Glasnevin Cemetery and her husband buried her as close to Michael Collins as possible, as per her last request. It must have been an awkward wish to fulfill for Felix Cronin, but he did it. The graves are a stone’s throw from each other and even though Kitty is remembered with her family, she loved another man too, until the day she died. 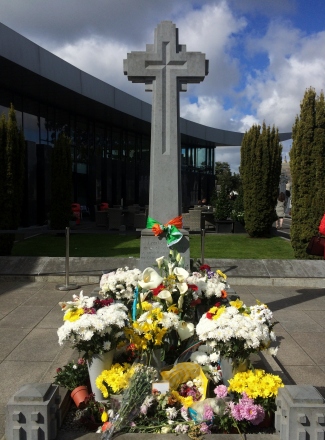 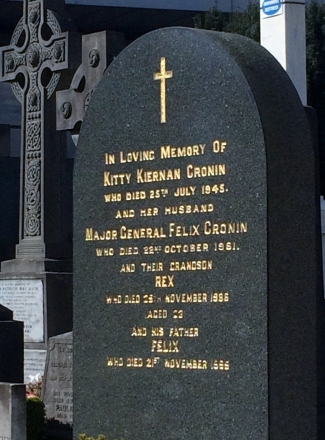