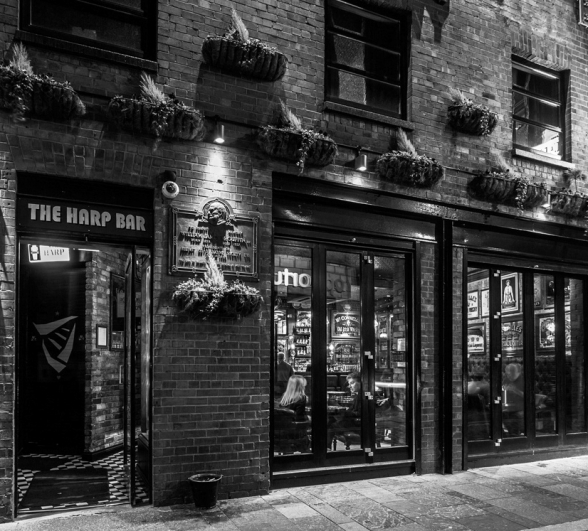 On this day in 1975, John ‘Sean’ Doherty and Denis McAuley were murdered by a bomb that was thrown into the Harp Bar in Belfast. Given the giant explosions of the time period, it was a relatively small attack but it resulted in two deaths and multiple injuries. It was also the second attack on the centrally-located Harp in only ten days.

Doherty and McAuley were out celebrating a wedding when a man walked into the bar and threw a hand-held bomb into the building. The two victims may or may not have been targeted by the assassin but if they were, it was not because of any paramilitary connections they had. The resulting RUC (Royal Ulster Constabulary) investigation found that Doherty and McAuley were not involved with any dissident groups. Their murders were attributed to being in the wrong place at the wrong time.

The investigation into the bombing turned police toward the Ulster Volunteer Force (UVF), a loyalist paramilitary organization. The attack was carried out by two men, the man who threw the bomb and another armed man who fired at patrons from outside near the getaway vehicle. At least one of the suspects was formally identified but when the witness refused to testify in court, the case fizzled. It remains unsolved.

This may be because the shooting that occurred at the same bar ten days earlier was also tied to the UVF and police discovered that one of the weapons used in that attack had been stolen from the Forensic Science Laboratory.  This meant whoever provided that weapon to the UVF may have had ties to the military or the police – and when cases turn up information like that, they tend to stay unsolved. There’s no way to know if the same gun was used during the bombing, but given that the same organization hit the same place repeatedly within two weeks, one could be forgiven for thinking the attacks were related. Unfortunately so much time has passed that the case has gone cold and the families of the victims may never have the answers they still seek.

The times have changed somewhat in Belfast as did the bar’s location and there’s no hint of its troubled past today. The rebuilt Harp Bar is now hugely popular with tourists and locals alike and live music brings throngs of people to the place nightly. Very few patrons see the ghosts that linger in the corners and maybe that’s a sign of progress, for everyone except the victims and their families. They still hope that the investigation started forty-two years ago will someday bring them answers and justice.