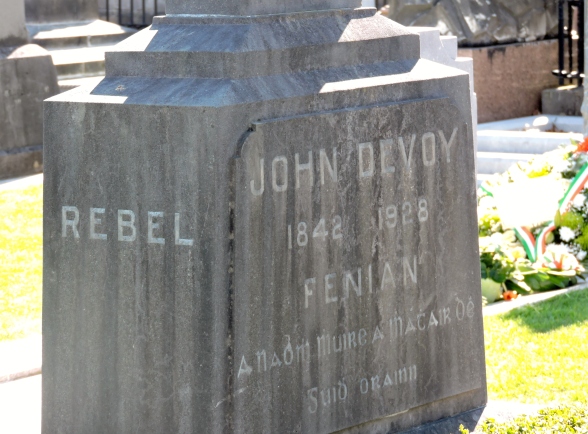 On this day in 1928, a great Irish warrior passed away. John Devoy lived a long life that was devoted to Irish freedom. For him, despite the many years he was in exile, Ireland was always home and its freedom was the only cause worth fighting for.

And fight he did. No matter where John Devoy found himself, he remained steadfastly focused on Ireland’s struggle for independence. When he was exiled to America he started the Gaelic American newspaper. He also wrote for the New York Herald and was a prominent member of Clan Na Gael, an American society that was dedicated to raising funds, freeing prisoners, fighting English rule, and sending arms and support to Ireland. Under Devoy’s rule, Clan Na Gael aligned itself with the secretive Irish Republican Brotherhood and he sent many of its members on missions across the globe to disrupt, dismantle, and destroy English imperialism in Ireland and beyond.

Devoy is one of the only men to have had a hand in the Fenian Uprising of 1867, the Easter Rising in 1916, and the Irish War of Independence. These three conflicts alone spanned nearly sixty years. John Devoy spent more than the average lifetime involved directly in the many covert operations and open conflicts that led to Ireland’s eventual independence. Patrick Pearse once called Devoy “the greatest Fenian of them all,” which may still have been an understatement. The man was utterly devoted to Ireland, even when (or maybe because) he was thousands of miles away from it.

In America, Devoy was a powerful and political force. He raised money for communities and countries. His endorsement could make or break local politicians and when he didn’t stand for something, much of his strong Irish network wouldn’t either. He plotted with future Rising leaders like Joseph Plunkett, Roger Casement, Patrick Pearse, and Tom Clarke when they were in the US. When these men and more were executed for their roles in the Easter rebellion, Devoy opened his vast network for their widows and other emissaries from Ireland who came to America on fundraising missions. He openly criticized Eamon De Valera and his policies but Devoy eventually supported the Anglo-Irish treaty, despite his dislike for Ireland’s future leader. A few years later, once the Irish Free State was up and running Devoy’s exile finally came to a close. In 1924 he returned to Ireland with much fanfare but he continued on as editor of the “Gaelic American” from afar. He maintained this role until his death four years later. Ironically, he died on American soil during a return visit to the United States.

John Devoy was mourned heavily on both sides of the Atlantic. When his body was returned to Ireland, he was given a state funeral before his burial in Glasnevin cemetery, where he rests to this day. His headstone proudly proclaims him to be a Fenian and a Rebel, a fitting monument to one of the greatest of them. It visited regularly by both Americans and Irish alike, even so many years later after his death.