Learning Irish is a struggle for me. I’ve tried many programs, and dutifully play with my Irish Rosetta Stone weekly but it is somewhat joyless and difficult without another Irish speaker to practice with. So when the advertisement for the 18th annual Irish Immersion weekend at the United Irish Cultural Center in San Francisco, California came across my radar, I planned on trying to find a way to attend.

This was not my first attempt but the Immersion’s price tag is a bit steep so I’ve never made it before….and probably wouldn’t have made it this time either except that my registration fee was a birthday gift from a dear friend I always go to Ireland with. Kathleen’s theory is that one of us needs to learn Irish in preparation for the inevitable day that we move to Ireland – and I thought I was pretty up to the task. I felt pretty confident about what I already knew when I walked in but I quickly learned that it is one thing to know some phrases or a lot of vocabulary and another altogether to be able to carry on a coherent conversation. I was even more intimidated when I realized that some of ár múinteoirí were prominent and well-known Irish speakers in Ireland, who bring the language to life every day.

My teacher was Liam O Cuinneagáin and he was the patron saint of Irish for us beginners over the entire weekend. It turns out that he runs Oideas Gael, a language school in Donegal that Kathleen and I happened by on our adventures last March. She and I often talked about going back there for classes – but here he was in San Francisco and I couldn’t believe my luck.

Five minutes into the first session, I realized everything I knew was wrong. My confidence fled along with any of the phrases I knew in Irish after Liam started speaking. My pronunciations were off, even though I’m usually quite good with them. I stumbled and mumbled my way through the first night of classes and was practically in tears when I got home. It was going to be a very long and humbling weekend and I wasn’t sure about it anymore. I didn’t even want to go back.

But I did and by the end of the immersion I was very sad it was over. The price was steep but the food’s delightful and the education was priceless. Liam made sure that none of us left without a working knowledge of Irish, its roots, dialects, and history. Most of us left with the ability to carry on a very basic conversation in Gaeilge. He was incredibly generous with his time, humor, and energy. After the end of the immersion, Liam gave a lecture for the Irish historical society about the past, present, and future of the Irish language and what direction he hopes it will take. I learned more from him in 72 hours than I’ve learned in two years of struggling through Irish lessons on my own. It’s a very special thing to be part of a mini-Gaeltacht, albeit a temporary one, and I don’t think I’ll ever forget it. Thank you Kathleen, for this wonderful gift. That goes for the UICC, Nikki Ragsdale, Sean Seamus, and all the other teachers and organizers too.

I still want to go back to Oideas Gael for classes, but I’m going to have to settle for some local ones first. The UICC is starting weekly lessons soon, so if you’re nearby I encourage you to look into them. The resources they give their students are unbelievable and I’m looking forward to taking them in the new year. The immersion is usually in September, so look for it in 2017 – it’s worth the money, even if you’re not from the bay area. If you’re in Ireland, check out the courses at Oideas Gael for me. In the meantime I’ll be here in front of my computer wearing a funny headset, trudging through notes and programs, and trying not to lose the gifts I’ve been given. 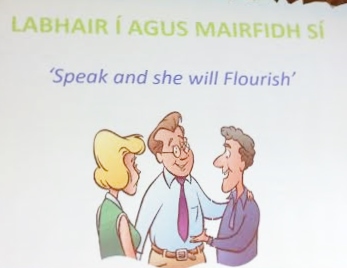