The North of Ireland is a complicated place – especially in July. Every year makeshift towers of debris, old tires, and wooden pallets reach higher and higher into the sky. They are decorated with sectarian slogans, political effigies, Irish flags (or Ivory Coast ones, since some can’t tell the difference between the two), and serious threats against Catholics, opposing politicians, Irish men and women, minorities, and the gay community. These dangerous displays are what they call culture this time of year and they are a horrifying example of the division that continues to exist in the North.

These enormous bonfires are built in honor of William of Orange (a Dutch King, by the way) to celebrate his victory over the English king James II. Yes – you read that right. The people who now violently insist on being considered English continue to cheer about the defeat of their own historical leader. I never tire of pointing that out, but it makes no difference because what they’re really celebrating is the Protestant victory over Catholicism and the power the Protestants held in the North for centuries.

To their dismay that power has begun to slip over the last few decades. The demographics of the region are changing and younger people are voting. The demand for equality is louder and a place that was once extremely conservative is opening up. A power-sharing government was put into place and the gerrymandering and corruption that led to the Troubles began to give way. A generation of lawmakers who saw the worst parts of war attempted to forge peace and for a while it has held. Some of the most defiant leaders worked together toward a different future and the area slowly began to reflect that, despite the holdouts who refused to support it.

You don’t have to spend a lot of time in the North to see that those factions are growing again and that the communities are still worlds apart, even when they’re right next door to each other. Many ‘peace gates’ and interfaces in Belfast remain closed. The walls are going up instead of being torn down. Over the last few weeks, flags and paramilitary banners have been erected throughout the region, even in mixed and more neutral areas. Hate crimes are up and new provocative murals are being commissioned and painted. Recently Loyalists attacked an Irish bar in Liverpool during their own parade. Last week Irish Catholic school girls in Ardoyne found that their school curbs had been painted red, white, and blue during the night and their driveway was tagged with Loyalist graffiti. This is a more subtle attack than they’re used to, but an attack all the same. All counties have seen an uptick in violence even before the marching season began in earnest. 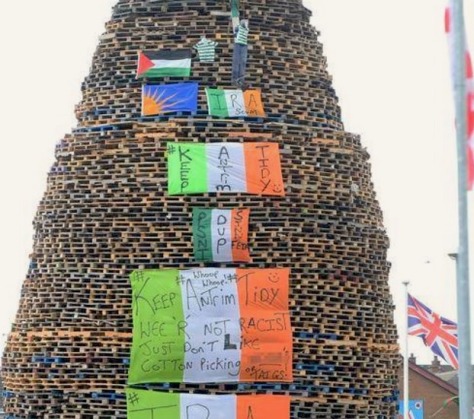 Photo from the Irish News

This all says one thing. People are afraid. Fear is not a culture it is a state of existence, and one that everyone must be willing to move away from in order to survive together. Underneath the rabid defenses, the dangerous bonfires, the blind hatred, and the sectarian songs there is an immense fear of change. Many people are convinced that moving forward means losing everything and that idea is terrifying and unacceptable. That fear began in the highest positions of government and it has been weaponized to get votes, to bribe officials, and to escalate division. The Orange Order, the DUP, and the Tories have used it to consolidate their power and it’s business as usual for them and their base – full of the same superiority that has been celebrated with bonfires and parades since the Battle of the Boyne. For Sinn Fein it is a valid threat to the Good Friday Agreement and fuel on the fire that has led to their highest gains in decades. But for the average person, all this fear and political maneuvering is an echo of the area’s troubled past and a potential end to the fragile and relative peace they’ve enjoyed for nearly two decades.

For many regular people, marching season is all bullshit anyway. They have evolved and they understand that celebrating your own history doesn’t have to mean denigrating the lives of others. They’ve learned that you don’t have to throw your beliefs in the faces of those who disagree with you all the time like a petulant child. Many just want to live their lives as best they can and they try to ignore the chaos and the grandstanding. There are many young people in the region who didn’t see the Troubles and they don’t want to start now. They reject these ‘traditions’ and don’t pass them along to future generations. Some have sent their children to integrated schools in the hopes that they can bridge the gap. Others have chosen to live in mixed neighborhoods where flag wars or religious divisions are uncommon. They stay central geographically and politically. It’s not just the younger people either. Many who lost everything during the violence of the past are now trying to make sure that no one else will ever suffer like they did. People who have spent their whole lives searching for justice now choose to reach out across communities, instead of continuing the cycle. Former paramilitaries on both sides are now politicians, tour guides, and educators. These people didn’t give something up to forge a better future, they chose to build one. They made a conscious decision to NOT hate and they refused to give in to fear. They hold their histories proudly and still believe in their ideals but they acknowledge that others have the right to do the same even when they disagree, and they don’t demonize them for it. They stand up for equality, art, language, humanities, and intellectual advances – which are the very definitions of culture. These brave, more tolerant people are the real heroes who should be celebrated every year. They remain the North’s best hope for a peaceful future. The Orange Order certainly isn’t – and it’s time to stop celebrating them as such and glorifying the years of trauma they inflicted on the ‘conquered’.

Instead we must recognize them for who and what they are – they are the people who look to the past instead of the future. They tear others down in order to feel important. No one is stealing their culture like they claim, it is just dying the natural death it deserves as more people reject hatred. Politicians have chosen platforms of fear and bigotry for too long and we must resist them to fight for a better, less polarized culture that we can all truly celebrate together, no matter where we live. Use the ballot box to force change and be active across your communities. Teach the next generation to be better and most of all, stay safe out there and stay engaged. Don’t let their flames of fear defeat you.

“We have got to extend the hand of friendship, we have got to take the peace lines down brick by brick.”  David Ervine

“In fact, I would defend to the death their right to express a different point of view.”    Martin McGuinness 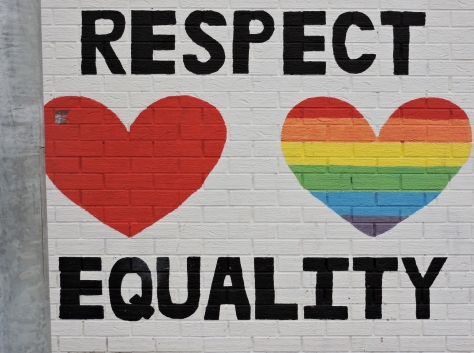