Danny Doherty and William Fleming grew up in Derry. They were from Republican families and each had relatives that were imprisoned at one time or another for their political ideals and paramilitary activities. They followed in their families’ footsteps and each joined Na Fianna Éireann at a young age, before funneling into the Derry Brigade as soon as they were able.

Each man knew what the cost might be. They knew their membership in the IRA could land them in prison or in the grave but they felt it was worth the risk. Danny Doherty was a veteran with six years of active service in the Derry Brigade but Willie Fleming was younger and greener with only two years under his belt when the two men were killed (or overkilled) in a hail of gunfire on this day in 1984.

The two men were on a mission and were riding a motorcycle on the Gransha Hospital grounds when they were spotted and ambushed by an undercover SAS team. The soldiers rammed the motorcycle before they unloaded on the men. Fleming was thrown off the back of the bike and he never got up. The soldiers shot Willie a total of sixty times. Four shots were to the head.

After the motorcycle was hit, it careened out of control. Danny Doherty was already wounded when he was shot twenty-four times, including three head shots. The soldiers wouldn’t stop shooting at the men even after they were clearly dead. Instead they grabbed other guns so they could keep firing at the dead men in a clear case of rage and overkill. Doherty and Fleming were left where they fell for hours and hours before the police finally removed their bullet-riddled bodies.

When the soldiers were questioned they said they that they were afraid for their safety and/or lives when they confronted Doherty and Fleming, which is the typical law enforcement excuse all over the world. Many politicians questioned the circumstances surrounding the shootings but despite their valid concerns about a shoot-to-kill policy no one was punished for the two men’s deaths. At the resulting inquest, the jury seemed skeptical as well and insisted that the soldiers should have given Doherty and Fleming a chance to surrender but in the end, their ineffectual reprimand was the only one given.

The two men are buried in Derry city cemetery and remembered in various memorials throughout the area. When their funeral processions met and joined each other in the city, it resulted in the largest funeral attendance that Derry had seen in years. Danny Doherty and William Fleming rest in the Republican plot and were buried with full military honors. Earlier this year they were joined there by the man who may have given them their orders and who certainly gave their graveside orations, Mr. Martin McGuinness. 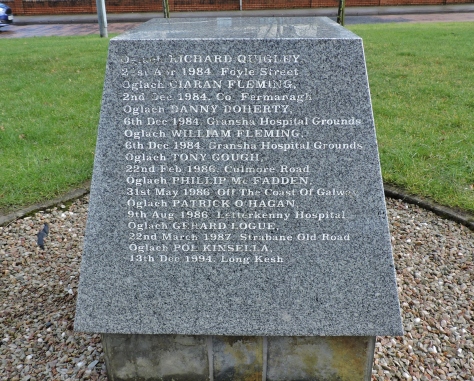