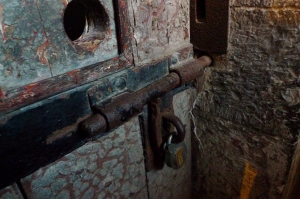 It has been said that tourists – and mostly American tourists – are the only reason that Kilmainham Gaol is still open because most Irish couldn’t be bothered with it these days. My new friend who is now happily married here in the U.S. agrees with the travel books that say things like that because he and his generation seem to be sick to death of the glorious dead mentality and couldn’t care less about the history and the Troubles that have haunted the country since even before the Rising of 1916. In fact, he was shocked that we were still asked questions about our religion and last names on our travels to Ireland at the end of last year, both in the Republic and the North because he thought those kinds of things were finished.

However, when I did tour Kilmainham Gaol, I was in a group mostly made up of Irish people and all seemed just as profoundly affected by it as I was. Perhaps it was because of the off season which meant my group was thankfully smaller when we went through the infamous prison, or perhaps it was an anomaly altogether but I was glad for it. It made for a decidedly more intimate and more personal experience. 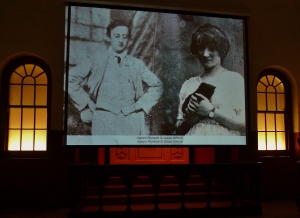 The tour begins in the chapel, with the brief Cliffnotes version of Irish history and the story of Joseph Mary Plunkett and Grace Gifford. The heartbreaking tale certainly sets the mood for the rest of the tour and the stories do not get any less bleak while you explore. There’s the one of the 8 year old who died in the jail, the horrible living conditions of the times, and tales of the famine woven into the dark trek, before it even touches on the rebels who were notoriously executed there. It certainly has a vibe of despair that hasn’t dissipated in the years that it has been prisoner free, so it is easy to see why it has a reputation for being haunted. 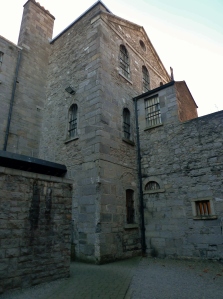 The guided excursion is very efficient, strict, and fast. As someone who wanted to spend an afternoon amongst the ghosts, this was somewhat disappointing. However, because there were fewer people waiting for the next tour I was given a little leeway to go back and snap some pictures in the cell block that held Constance Markievicz (one of my heroes) and the leaders of the Rising when I missed taking them the first time through.

Since the guide was kind enough to indulge me in this backtracking excursion despite another tour behind us, he led me through some passages that we had not explored – some of which seemed to be regularly off limits, which was awesome. He let me snap some pictures but then rushed me back to the group.

The main room is something to behold. Movie lovers will recognize it from various films but when I stood in it, the movies were the farthest thing from my mind. It was vast and open compared to the rest of the passageways and rooms that we had gone through but the trapped and claustrophobic feeling never faded, even in a room that was large. It was a place of conflict and oppression that had been restored to a strangely beautiful, eerily lit chamber much like the rest of the Gaol. 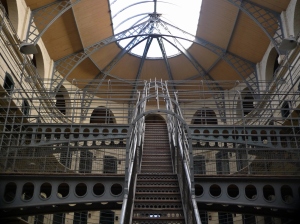 The whole place feels appropriately like a tomb. Footsteps echo and voices carry throughout. Cells with the names of dead men on them abound and the tales of their final days are gut wrenching, even when you have already heard them a thousand times. There’s something about listening to them in the place where they occurred that makes them even more real. It was much harder to be there than I imagined it would be, and I already knew it was going to be tough. I recommend bringing tissues if you are even a slightly sensitive creature, particularly for the yard and the museum.

The crosses mark where the leaders of the 1916 Easter Rising were executed in the aftermath of the rebellion – a decision that has haunted the British government ever since it was made. The guides don’t really let you linger anywhere, even if you are shedding a few tears, as many of us did. One of the sites of the executions is literally less than 10 feet from the gates of the Gaol, which seemed particularly cruel to me. The leaves added a poignant splash of color in the drab surroundings that I couldn’t resist photographing and as we went inside I grabbed a stone from the ground to carry a piece of that history with me. I am not likely ever going to forget standing in that place, surrounded by the spitfire spirits of so many rebels, but I wanted a token of it nonetheless.

As we returned inside, our guide told us of the museum upstairs and made his way over to the next tour he would lead. Many people left at that point, giving me the museum on the top floor to myself. I was grateful for that when I walked into the “Last Words” exhibit – one that is full of letters, artifacts, and photos of many who were executed at the prison. It focuses on the Republicans and Nationalists – as does the entire tour – and it is awesome, in the true definition of the word. It is heartbreaking to read the Pearse brothers’ letters to their mother, or Plunkett’s love notes to Grace. There’s an audio track playing the final words of those who were executed or jailed within the prison walls and it adds even more tragedy and humanity to the experience.

As I left the building after bearing witness to all those stories, I felt drained and highly emotional. In fact, I went straight to a pub and started writing everything I felt down in order to remember later, while fidgeting with my rock from the yard. I was glad I had gone but the horror of the place really got to me, even though it is now pristine and empty.

It’s odd to recommend such a place to people, but I do wholeheartedly. On one hand, I understand the books that say it’s for tourists – those who know nothing about Ireland’s Nationalist/Republican/Rebel history get a nice little truncated version of it when they visit. I also understand my Irish friend ‘s desire to get over all of that because when your history is so full of painful experiences and unjust murders, perhaps it is more preferable to ignore it or want to move beyond the past. Still, I think it is an important place that stands in mute and grim testimony to the brutality and savage times that have mostly disappeared. Historically it is important and presently it is educational. If you have the chance, go, no matter where you’re from.

There is one totally glaring and almost unforgivable omission though, and that is the story of Ann Devlin. Her story is one of the most important and notorious secrets within Kilmainham’s walls and it is completely absent from the tours. Even when I asked our guide about it, he dodged any discussion of her captivity or tale. It is a long one and I am sure I will write about it another time, so I won’t get into it now except to say that it should be included on the tour and it isn’t. If you travel to the Gaol, ask about her – if enough people do, perhaps they will make it a point to start telling her story,

**For a shorter and less emotional/more matter of fact piece on the Gaol itself and its history, you can find the article written for the Atlas Obscura here.