The New York Times covered the Rising extensively for a foreign paper. On the morning of the 4th, they were just catching on to the fact that Patrick Pearse, Thomas J Clarke, and Thomas MacDonagh had been executed the day before. They wrongly printed that the men had been shot in the Tower and that James Connolly had died with them.

It took another three days for them to report that these four men had been killed on May 4th, 1916. The headline was about Joseph Mary Plunkett because he’d been executed just hours after he married Grace Gifford, which made for a great (in the sensationalist news kind of way) story that was guaranteed to sell papers. 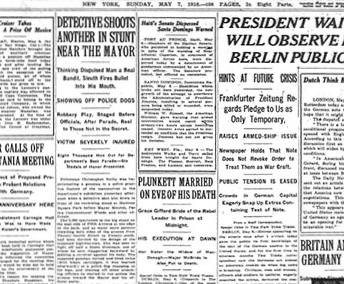 Many believe the execution of William Pearse was nothing more than a revenge killing carried out by the state. The English authorities were enraged by the thought of the rebellion. Willie may have exaggerated his own role in the uprising and he was the only person to proudly plead guilty at his court martial. This combined with his relation to Patrick Pearse sealed his fate.

Edward ‘Ned’ Daly was born to be a soldier – it was all he ever wanted. He was one of the youngest commandants and he saw some of the fiercest fighting of the entire Rising. He was also the youngest to be executed for his role in it. He adamantly denied the charge of  ‘aiding the enemy’ because as he saw it, he did everything for his own land and country.

Michael O’Hanrahan was not a leader that many know about – in fact, he was never first in command at all. However, when O’Hanrahan realized that the garrison at Jacob’s Factory was surrounded, he urged his chief to evacuate the position in order to save the heavily populated neighborhood they were stationed in. This concern for others’ lives did nothing save his.

These men would be followed by nine more in the days and months to come.

That’s me sorted and ready to have a giant drink or 5 and to have this horrible world drowned out by the @dropkickmurphys . Thanks for the respite lads!! #music #standupandfight #musicmakeslifebetter #irishmusic #standupandfightandillstandupwithyou #dropkickmurphys #livestream #freegig #loudandproud #dropkicks #thegauntlet #loudmusictherapy #irishmusicparty #irishmusic #quarantinegig #godropkicks #letsgomurphys #americanirish #americanirishmusic #loudmusicsaveslives #loudirishmusic #jamesonwhiskey #jamienginger
Happy birthday to Margaret Skinnider. She nearly died for Ireland during the the Easter Rising, fought again in Ireland’s War of Independence and took an anti-treaty stance during the Irish Civil War. Despite her service it took over three decades for her to finally get a pension because the word “soldier” was defined as male and therefore, pensions were off limits to women. Her applications were repeatedly denied but Margaret fought for her equal status as fiercely as she had fought for Ireland. Her application was finally approved in 1938. Ms. Skinnider lived a long life, despite her nearly fatal injuries during the Rising. She was laid to rest in the Republican plot of Glasnevin cemetery next to her friend, fellow soldier, and mentor, Madame Markievicz. Over a century later, they are both remembered and recognized as two of the most devoted and fiercest female warriors in Irish history. #margaretskinnider #irishherstory #irishherstoryblogs #irishherstorynerd #ireland #easterrising1916 #easterrising #constancemarkievicz #heroes #womenoftheirishrevolution #revolutionary #freedomfighters #scottishbornirishpatriot #eire #happybirthday #femalefighters #cumannnamban #cnamb #suffragists #suffragette #equality #onthisday #irishhistory #onthisdayinirishherstory
Follow Choosing the Green on WordPress.com