On this day in Irish history one of the bravest Irish women  bid her last farewell to her beloved Ireland. Elizabeth O’Farrell passed away on June 25th, 1957, forty-one years after completing a dangerous mission that many thought would kill her. In 1916, Ms. O’Farrell wore a red cross and carried a white flag through raging battle zones to offer the surrender of the leaders of the Easter Rising. As she left the makeshift rebel headquarters in Moore Street her friend Sheila fell into hysterics, sure that Elizabeth would be killed on this mission.

O’Farrell survived her first trip through the gun battles, and many more to come. She was accused of being a spy when she reached the English garrison and her red cross was torn off of her. She was then was ordered to return to the revolutionaries in order to bring Patrick Pearse back with her because the English would not accept the surrender from a woman. She stood by Pearse’s side as he officially ended the Rising, but only her shoes can be seen in the pictures of that fateful moment.

Once the surrender was given, it fell to Ms. O’Farrell to carry the news to all the rebel garrisons. Time and time again her life was in danger, but she did not falter. Elizabeth’s courage was unmatched during the Rising and it was seen repeatedly for the rest of her life. She bravely defied stereotypes and societal rules and she and her life-long companion never gave up the fight for Irish freedom.

The two rebel women remain close companions even now. They are buried together in Dublin’s Glasnevin Cemetery. 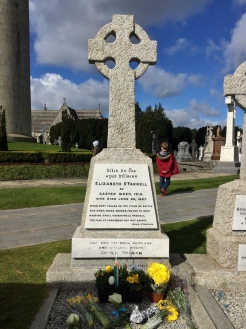 One thought on “Remembering Elizabeth O’Farrell”

Seven years ago yesterday my Irish history book was published. I’m proud of it but was never 💯 satisfied with the book so a year ago yesterday I took it out of circulation. You can still find copies here and there though and it’s always nice to know when someone’s looking through it. If you happen to have a copy, I suggest reading the chapter about Jane Wilde today, given that her son Oscar left this world on this day 122 years ago. #oscarwilde #ladyjanewilde #holycrapiwroteabook #irishhistorynerd #irishwriters #irishhistory #onthisday #onthisdayinirishhistory #irishherstory #petticoatspatriotsandpartition #oscarwildelove #booksarehard #writerstears
For those who think California doesn’t have seasons. Autumn sunsets are the best no matter where you are.
Follow Choosing the Green on WordPress.com