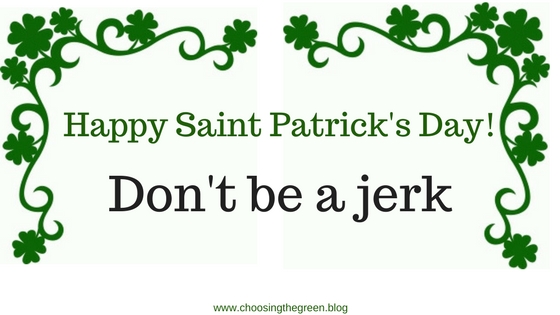 Yes it’s that time of year again. St. Patrick’s Day is upon us and here on the U.S. side of the puddle, it can quickly become a train wreck. This year I’ve decided to make an easy list that we can all hand out to our beer hat wearing, cheap leprechaun-looking, fake Irish dancing friends in order to keep them (and us) from acting the fool. Here’s five simple DON’Ts that will make the Wearing of the Green safer and more palatable for everyone, no matter where you live.

1. Don’t pinch people. It’s rather hard to believe in the age of the #MeToo and #TimesUp campaigns that anyone still has to be told that aggressively grabbing, touching, or pinching strangers is wrong. However, just in case you thought that rule didn’t apply on St. Patrick’s Day, let me remind you that it is still wrong to pinch any part of anyone for any reason without their permission. It will always be wrong to do that, so put your little urges and tiny crab claw fingers away.

2.  DO. NOT. ORDER. AN. IRISH. CAR. BOMB. Nothing personifies ignorance and casual cruelty better than walking into a pub and ordering up an Irish Car Bomb. Just don’t do it, even if the bar has decided to exploit or indulge obnoxious Americans. This horrifically named cocktail is designed to get you very drunk very quickly. It is highly effective but it’s also named after a weapon that has been used to kill and maim literally THOUSANDS of people….even in the country it’s named after. It is not funny, not appropriate, and not cool for you or your friends to sell or order any drink by that name, and it could get you kicked out of your favorite pub or just kicked in the face.

That being said, Irish Whiskey, Irish Cream, and Guinness are all very tasty treats. You can order and pay for a glass of each, mix the ingredients yourself, and try a delightful, super-intoxicating elixir. You could make up a new drink special just by calling it something else (it’s also been referred to as the ‘Holy Trinity’) or you can just refuse to serve or drink it at all and many would thank you for it. You have to be on quite a mission anyway to give it a whirl but you certainly don’t have to be an ignorant douche when you order it at the bar.

3. Don’t misspell the name of the day. If you’re hunting for Irish-themed decor or clothing, choosing a hashtag, or you have another reason to shorten the name of this holiday, please remember that the correct spelling is P-A-D-D-Y. It’s not St. Pat’s. There are no Ts in the Irish version of the shortened male name. As a good friend of mine once said, always stick with the Double Ds.

4. Don’t forget that this is a sacred holiday for some people. It’s easy to ignore the origin when terrible T-shirts, sparkly shamrocks, green beer, and offensively named drinks are the norm but it is still a religious day for many. Saint Patrick is celebrated for “driving the snakes out of Ireland” which is a metaphor for bringing Christianity to the island and systematically erasing its pagan roots. Incidentally, this is also why the color code of the day is green, which is traditionally associated with the Catholic faith in Ireland. This means that if you’re not a Catholic you shouldn’t have to wear it on St. Patrick’s Day. Then again, trying to explain that to a million and one drunken Grabby McFingersons in the room, can be exhausting. (See #1.)

Now I am all for changing the holiday from a religious one to a more inclusive, cultural celebration, however, spilling a beer on a real Irish person who is fresh out of mass while screaming “SHOTS!” in their face is beyond disrespectful and probably not the best way to make new friends. I’ve no love for the Catholic religion (and I personally support the ‘Bring the Snakes Back‘ movement) but stepping all over anyone’s holiday is messed up. Which brings me to my last and most important tip.

5. Don’t buy into stereotyping or bigotry. If you want to celebrate St. Paddy’s Day good on you! However, you don’t have to propagate the stereotypes to do it. Pass on anything that conveys the message that Irish people are drunks, fighters, leprechauns, or idiots. Find something that celebrates Ireland’s rich culture instead of something that mocks it and when you’re using your outside voice, please realize that no one says “Top o’ the morning” ever and that fake accents are obnoxious, whether you’re drinking or not. Just say no.

And there you have it. Five things you shouldn’t do this year or any other for that matter. Have fun, get wasted, go to church, take the green Mardi-Gras beads out of the closet, or do whatever else you were planning to do – just try not to be an asshole when you’re doing it. Simple as that.