There are many, many women in Irish history who never get the recognition they deserve for their contributions to it. Anne Devlin may be the most egregious example of that. Her strength and dedication to the Irish cause was truly like no other.

Anne Devlin was born into a very Nationalist family in Rathdrum, County Wicklow. She was raised with a firm belief that Irish independence was not only possible, but necessary. Her home was raided on many occasions because of her family’s known opposition to English rule. Many members of her immediate family were arrested after the failed uprising in 1798, including her own father, and this infused Anne with revolutionary ideas of her own. When her father was released from yet another stint in prison, Anne was moved to Dublin where she met the revolutionary Robert Emmet. She went to work in his household and he became a shining beacon of platonic love and hope in her life. On paper she was his housekeeper but that was simply a cover. She was hired to provide an air of authenticity in case authorities were watching the bustling house while he planned another rebellion. Her household position also made her the perfect courier for the messages and orders that Emmet sent throughout the city. As a result, she likely knew the names and locations of every single insurgent in Dublin and beyond. She was a believer in the upcoming fight against the English and a fanatical supporter of the man who was planning to start it. They were profound friends.

Unfortunately for both of them, Emmet’s uprising in 1803 failed miserably. When it did, a group of English Yeoman descended upon the house in search of Emmet and found Anne and her sister instead. The women were tortured by the mob for information. They stabbed Anne slowly in numerous places with bayonets. They repeatedly hanged her, choking her again and again in an effort to scare her enough to talk. They traumatized her younger sister and threatened to rape and kill them both. Anne endured their torture and said nothing despite her wounds. When the mob finally gave up, the two sisters hobbled back to their own home just before authorities swooped in and arrested the entire family. They even took the small children into custody who were far too young for prison.

Anne’s constant presence in the Emmet house hadn’t gone unnoticed and authorities did not fall for her housekeeping excuse, given the failed revolt and her family history. She was brutally mistreated and tortured during interrogations but even when the police threatened everyone she knew, she still refused to speak. She was blackmailed and offered bribes. She was taken to Kilmainham Gaol where her daily tortures got worse under the sadistic eye of the prison doctor, Edward Trevor. Anne’s friends and family sent numerous pleas to her begging her to save herself since Emmet was doomed regardless, but the steadfast woman refused to give the authorities any information or satisfaction. Eventually twenty-one members of her family were tossed into the prison in order to be used against her. Her nine-year-old brother Jimmy died of starvation and neglect while incarcerated, making him one of the youngest prisoners to die in Kilmainham’s long and brutal history. The authorities thought that seeing his body would finally break the stubborn woman and they confronted her with the dead boy. Anne went nearly insane with grief but even that could not force names or information from her lips.

In yet another effort to break her will, the authorities arranged for Anne to “accidentally” see Robert Emmet before he was executed, assuming that their meeting would provide them with some leverage during her next interrogation. Again, they were wrong. Anne walked right by him, with a secret whisper but no visible hint of recognition or friendliness. When they attempted the same type of chance meetings with other prisoners who may or may not have been involved in the short-lived uprising, each had the same outcome. Anne’s behavior made it crystal clear to both her friends and her captors that the information she held in her head would never be revealed, no matter what. From the first time she was tortured to the last, her defiant replies remained the same. “I’ll tell nothing” and “I have nothing to tell” were the only coherent sentences she answered with.

It is a wonder that Anne Devlin survived. She was kept in the dungeons of Kilmainham for nearly three years. Her captivity was secret and off the books for most of her stay, and many employees and guards knew nothing about the woman in the dungeon or the horrors she was subjected to under their feet. Unfortunately, this means that most records and accounts of her suffering are non-existent as well. Devlin finally caught a break a few years into her captivity when she met the wife of one of the prison guards. She sympathized with Anne’s plight and set about trying to free her. Eventually she succeeded but Anne was just as isolated and lonely on the outside as she had been in the dungeons of Kilmainham. The authorities watched her every move and took note of anyone she interacted with, causing all who had known her before to steer clear of her after her release. Anne Devlin was destined to lose her friends and family despite the fact that she never betrayed a single one of them. Hers was a lonely life through no fault of her own, and the relative freedom had to leave a bitter taste in her mouth. Even after the English stopped monitoring her, the people who had been in Anne’s life remained wary of her. Many gossips whispered about a sordid love affair between her and Robert Emmet, undercutting the massive fortitude and strength of character she had shown. It was easier to imagine that Devlin’s loyalty was to an illicit lover rather than to Ireland, because many who claimed that same devotion secretly knew that they would not have been able to endure her torture.

Anne lived a life of poverty and obscurity in the Liberties slum of Dublin after her release. She eventually married and had four children, living quietly and anonymously as a poor washerwoman named Mrs. Campbell before revealing her identity and recounting some of the stories she had kept secret for more than forty years. She told her tragic tale to Dr. Richard Robert Madden, who was working on a biography of Robert Emmet. When he began his research he was told that Mrs. Campbell might have known some of the people involved but at first he did realize who she was. When Anne talked about Emmet, she came to life. He began recording her accounts but Madden printed very little of her incredible story. Her tales were relegated to a side plot in the footnotes of Emmet’s biography. He used Anne for her memories of the man he was researching and forever linked her story to Emmet’s instead of giving her a heroic tale of her very own. However, his sessions with her affected him enough that he made a public appeal for Anne in the local newspaper. He asked for donations on her behalf, but it seemed that the world had forgotten about Anne Devlin and very few donated to the poor woman. She died in the notorious slums where she lived and was buried in an unmarked pauper’s grave. When Madden later learned of her death, he had her body exhumed and he had her reburied close to the Republican plot in Glasnevin Cemetery. He marked her grave with a large stone that says, “To the memory of Anne Devlin (Campbell), faithful servant of Robert Emmet, who possessed some rare and noble qualities: who lived in obscurity and poverty, and so died, the 18th day of September, 1851, aged 70 years.” 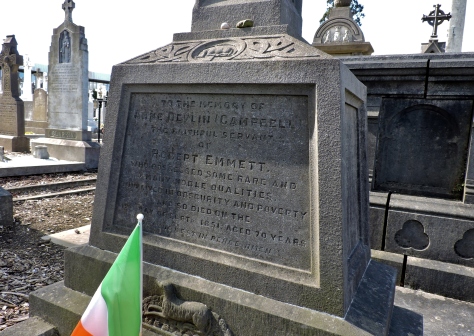 While we must thank the good doctor for keeping Anne Devlin from vanishing altogether and for belatedly preserving her memory, it is unfortunate that he chose those words to immortalize her with. Yes, Anne had been a faithful servant of Robert Emmet but it would have been more accurate to say that she was his confidante and friend. An even better description would have been a “faithful servant and soldier of Ireland,” since her loyalty was not just to the rebel leader, but to everyone involved in the fight for her country. In the biography he eventually published about Robert Emmet, Dr. Madden diminished Devlin further by describing her as “a poor creature of plebeian origin” and a “lowborn woman.” Other biographies followed suit. They focus on her origins and lowly station, if they mention her at all. None of the books on Emmet honor Anne for her incredible bravery and strength or her friendship and loyalty. This lack of recognition is appalling because Anne Devlin was one of the staunchest warriors in Irish history. Her humble birth didn’t stop her from protecting her secrets with a fierceness that we should all aspire to. Devlin’s upbringing and monetary status didn’t change the fact that she refused all bribes and stood up to the English at great peril to herself and her family, when no one else would have. At the very least, her story deserves to be told as her own and not as a brief mention in Emmet’s history.

Kilmainham Gaol now gives tours that are based on Nationalist history and even though visitors are taken to Emmet’s cell, there is rarely any mention of Anne. They sometimes have a pamphlet on her in the gift shop, but it’s often out of stock. If you take a tour, please ask about her. If more people show an interest in her maybe they will eventually include her captivity in their tours and Anne Devlin will finally be recognized as a warrior in her own right. She saved so many lives by sacrificing so much of her own and she deserves some credit and recognition. Her story needs to be told to everyone with even a passing interest in Irish history.

These days there is an annual commemoration ceremony in her honor on the Sunday that falls closest to September 18th. Its attendance is growing, proving there are some in the world who will not forget Anne Devlin’s noble ordeal. A walking tour dedicated to her memory just went through the Liberties area in Dublin and told some of her story. There are a couple of songs that have been written about her and various books (including my own) recount her tale. There seems to be a growing interest in her life and thank goodness for that. Her grave in Glasnevin is adorned with an Irish Wolfhound, a symbol of the unwavering loyalty that she gave to everyone around her and returning that favor is long overdue. Anne Devlin deserved more in life, and she continues to deserve even more in death. 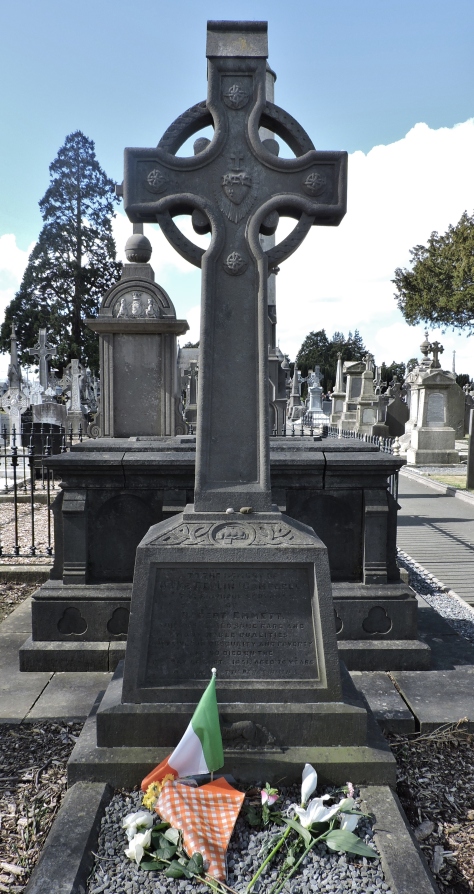