Autumnal Equinox. Second Harvest. Mea’n Fo’mhair. Mabon. Whatever you call it, this day marks the changing of the seasons and it celebrates equality and planetary harmony on the earth. The Northern and Southern hemisphere rarely get the same thing at the same time. There are only two days that they see eye to eye when it comes to light and darkness, and Mabon is one of those days. During the Autumnal Equinox both hemispheres get exactly the same amount of light—and the same amount of darkness—due to the tilt of the Earth and the position of the sun. The seasons may still be reversed, but the lengths of the day and the night are exactly the same and that balance only happens one other time throughout the year. The harmony may not have anything to do with mankind at all, but man has celebrated it for centuries.

END_OF_DOCUMENT_TOKEN_TO_BE_REPLACED 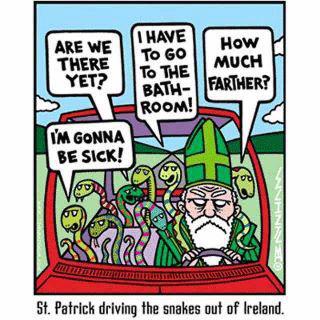 St. Patrick’s Day. Every year people celebrate this day by punishing their livers and making poor wardrobe choices, with stereotypical and sometimes truly awful T-Shirts. The fake accents yelling out over loud music get worse and worse as the pints keep coming and if you’re lucky, you may get a little Irish parade or traditional music in there somewhere too. It is not the solemn celebration one would associate with a Saint, but rather one that is decidedly sacrilegious in the eyes of the church. And you know what? I absolutely support it, (with the exception of the racist and stereotypical garb and the fake accents,) because anything that removes the original intent of this holiday is just fine by me. After all, this is not a celebration that has anything at all to do with snakes, but rather it is one that celebrates the defeat of free thinkers and ancient traditions. St. Patrick (who was NOT Irish, by the way) has the dubious claim to fame of driving all the snakes out of Ireland…but science has confirmed that there were no snakes at the time. Of course, Christianity uses the metaphor of snakes to talk about evil temptations and the devil himself….and following that metaphor, Patrick driving the snakes from Ireland means he drove out what he considered to be the wickedness – he conquered Pagan Ireland.

END_OF_DOCUMENT_TOKEN_TO_BE_REPLACED

Imbolc, also called Oimealg by the Druids, is the festival of the lactating sheep. Yes, you heard that right. It is derived from the Gaelic word oimelc meaning ewes milk. At this time of the year, many herd animals have either given birth for the first time of the year or they are just about to. It’s the first breath of Spring and it marks the center point of the dark half of the year. It is the festival of the Maiden and from February 1st to March 21st, it is her season to prepare for growth and renewal. On Feb. 1st, Brighid’s snake emerges from the womb of the Earth Mother to test the weather (Ground Hog Day anyone?) and in many places the first flowers begin to pierce the grounds of winter and start to bloom.  Brighid’s Crosses are made and exchanged as symbols of protection and prosperity in the coming year.

Home hearth fires are put out and re-lit, and candles are lit and placed in each room of the house to honor the re-birth of the Sun. It is a festival of fire and renewal and one of the first celebrations of Spring.
END_OF_DOCUMENT_TOKEN_TO_BE_REPLACED