On this day in 1916, Ireland’s Easter Rising began. All throughout Dublin men and women made their way to strategic outposts in the city with the hope that they could take them and last long enough for Ireland to be declared an independent nation. They were intent on overthrowing the English control of their homeland and went out with only that purpose in mind. Most other people had no idea of what was to come and they got up in the morning and headed to work as usual, unaware of how different their city was about to be.

Margaret Keogh (or Kehoe) was in that last group. She was a nurse at the South Dublin Union, where many of Dublin’s sickest and poorest people sought shelter and were taken care of by her and the other dedicated people on staff. South Dublin Union was originally a workhouse, but it had become a de facto asylum with caregivers, nurses, doctors, and others who helped the city’s most destitute population. Miss Keogh started her shift on that day exactly how she had started it every day since 1897 when she was hired to work there.

Soon enough it was clear that the day would be more exciting and stressful than usual. The SDU was on the list of places that would be advantageous to the rebel forces who were rising all over Dublin and Éamonn Ceannt led the 4th Battalion of Irish Volunteers into the area. They took up multiple positions on the fifty-acre property that the South Dublin Union was part of and waited for the fight to begin.

Margaret Keogh refused to abandon her charges when the rebels arrived. She went on taking care of her patients as the Volunteers fanned out and prepared for the inevitable fight to come. Some reports claim that she told the men that “she was with them heart and soul” but she was there to do her job, not to join with the rebels who had surprised her and the rest of the people at the SDU.

She was only doing that job when she was killed by English soldiers in the hospital wing of the building. There are a few conflicting accounts of Margaret’s death, but what is certain is that she was killed despite her obvious nurse’s uniform and the fact that she was totally unarmed. Éamonn Ceannt called her the “first martyr of the Rising” and she is remembered with that title by many even to this day.

Her legacy is somewhat conflicted too. When you research Nurse Margaret Keogh you will find her listed as a rebel participant in many accounts of the Rising and more than a few different publications list her as a member of Cumann na mBan – the female Nationalist revolutionary group that was closely tied to the Irish Volunteers. Nurse Keogh may or may not have been vocally and spiritually supportive of the Rising on the day that it began but there is no real indication that she had anything else to do with it, despite the many statements to the contrary. It is easy to mistake her loyalty for support, especially when there is a good reason. In 1932 Nurse Keogh was remembered in a commemorative book of Irish Republicans called The Last Post. Her entry didn’t include any memberships or associations with Republican groups but it did commend her for her bravery and it did commemorate her death during the Rising. When you combine that with the fact that there was another Margaret Keogh who was a devoted member of Cumann na mBan and who was dedicated to a free Ireland around the same time it’s easy to see how the many years of blur and confusion can occur, but that Margaret Keogh died in 1921, not 1916.

This distinction is not to take away from the memory of our Nurse Keogh but to give credit where credit is due. Margaret showed immense bravery on the last day of her life. She was a hero for her patients and she refused to abandon them in the chaos that ensued when the Rising began on this day in 1916. However, her death has been politicized and misinterpreted by some for the better part a century. What is most important is that she stayed true to the people she cared for until the moment she died and for that she deserves recognition and the utmost respect. Nurse Margaret Keogh should always be remembered as a hero – whether she was a rebel or not. 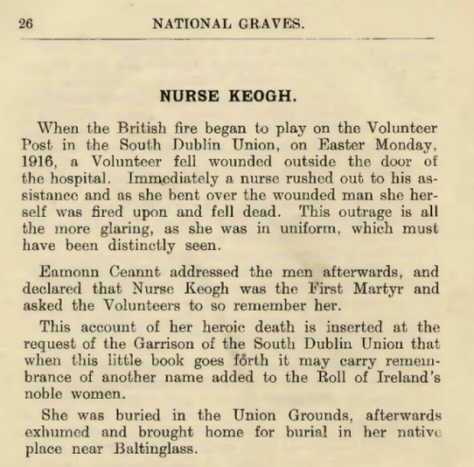