My body is rebelling against being thrown back into the States and I caught a vicious cold on the flight back from Ireland. This cold, on top of the jet lag, culture shock, and come down after such a mind-blowing holiday has left me quite speechless. I have a lot of catching up to do for sure and a lot of processing to do as well.

END_OF_DOCUMENT_TOKEN_TO_BE_REPLACED

Today Bobby Sands would have turned 62 had he lived beyond his hunger strike. Since he did not and I happen to be in Belfast, I decided to visit him (and others) in Milltown Cemetery, bringing flowers that were long overdue. 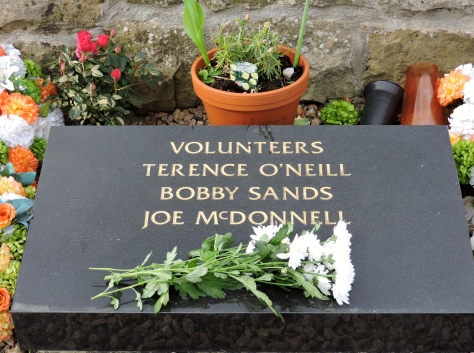 END_OF_DOCUMENT_TOKEN_TO_BE_REPLACED

And now for a different Máire.  Máire Drumm was born into a staunchly Republican family. She was lucky enough to have had a mother who was active in the War for Independence and the Irish Civil War, so the concept of strong women who could fight and lead was instilled in her from birth. Perhaps it was also the reason she knew she could grow up to be a commander in Cumann Na mBan and the Vice President of Sinn Fein.  She settled in Belfast in 1942 and began fighting on behalf of Republican prisoners, which she did for many years to come. It was in this role that she met Jimmy Drumm, a Republican prisoner who would later become her husband.

END_OF_DOCUMENT_TOKEN_TO_BE_REPLACED

On June 30th, 1890 a horrible tragedy struck the O’Connor family. John O’Connor was a well-known journalist & Irish Nationalist politician. He was the M.P. of West Wicklow & a family man who had a loving wife & 5 young kids. This seemingly adoring family was torn apart when almost all of them were fatally poisoned. Only John O’Connor & 1 of his daughters survived.
Yup #Ireland is officially more #EQUAL, #brave, & #free than the #USA. I mean, some of us knew that already but #SCOTUS just shouted it to the world. People with uteruses now have no right to privacy or autonomy. Fucking fundamentalists ruin everything. #RoeVsWade #RoeOverturned #tá #unequal #irelandhereicome #fuckthistimeline #vasectomyrequired #playtimeisover #americaisover #buhbye #fundamentalistsruineverything
Follow Choosing the Green on WordPress.com